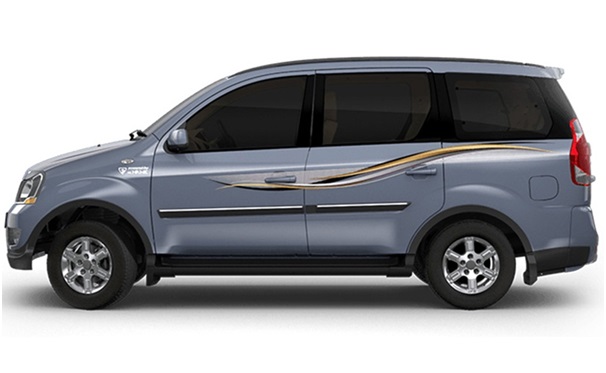 I’ve never been quite fond of the Mahindra Xylo. Call me biased, but I have a distinctive memory of fighting for seating in the passenger seat so that I can avoid the second-row and, of course, the crappy third-row. Well, in my defence, these memories date as far back from my college time and spending more than one hour on bumpy Indian roads in a crappy place was the last thing one would like to do. Trust me.

With the BS-VI emission norms set to be enforced very soon now, I don’t see Mahindra updating the Xylo to meet the said norms, even though it sold like hotcakes when it first came in the Indian market. But that was a long time ago, and the competition – say, the Ertiga – has grown by leaps and bounds since then.

If not the Ertiga, the consumers now prefer to stick with the concept of an urban compact SUV. Even still, the Mahindra Xylo doesn’t stand well in any aspect in front of its own sibling, the TUV300 Plus, which was originally unveiled to replace the ageing Xylo. But, there’s a catch. You can still grab a Xylo with a massive discount from a dealer before it goes out of stock. And if you happen to be looking for an MPV, let’s have a look at this one.

The Mahindra Xylo hasn’t seen much upgrades since its launch in 2009. Sure, a facelift model was launched in the latter half of 2014. While there have been minor aesthetic upgrades, the silhouette of the Xylo remains unchanged.

Well, as for the dimensions itself, the Xylo measures 4,520mm in length, 1,850mm in width, and 1,895mm in height. The wheelbase is a nice 2,760mm, and the ground clearance is a shy 186mm. Moreover, the base-spec variant of the car tips the scale at 1,875kg. Other than that, it has a fuel tank capacity of 55-litres. As for the boot space capacity, there is literally nothing to talk about with all the seats up.

The Xylo does come powered with two engine options, although the diesel-manual configuration is standard across the range. Well, those looking for an automatic can simply look elsewhere. The entry-level engine is a 2.5-litre four-cylinder unit, which churns out 95bhp and 220Nm of torque. Moreover, there’s also the company’s 2.2-litre mHAWk engine, which is capable of making 120bhp and 280Nm of torque. As pointed earlier, both are mated to a sole 5-speed manual gearbox. Moreover, both the engines are compliant with the BS-IV emission standards.

Keeping its rather large displacement numbers in consideration, the Xylo has decent fuel efficiency numbers. The larger 2.5-litre is capable of delivering 13.9km/l while the more powerful 2.2-litre diesel is rated at 14.02km/l.

The Mahindra Xylo does not deliver on the features front. Sufficed to say, the lack of updates has made the interiors look quite appalling and devoid of any modern equipment.

For instance, you get a 2-DIN infotainment system, manual air-con controls, steering-mounted audio controls, and a rather basic instrument cluster. Apart from that, there is nothing much to speak in terms of the overall equipment.

All the details regarding the Mahindra Xylo, namely, the engine, specifications, variant wise equipment, colours, dimensions, interiors, and exterior details are extensively covered in the brochure.

As of early-2020, the Mahindra Xylo is available in five variants, two in the 2.5-litre diesel-manual configuration, and three in the 2.2-litre diesel-manual configuration.The prices start at Rs. 9.63 lakhs for the D2 variant going all the way to Rs. 12.28 lakhs for the H8 ABS Airbag variant (all prices ex-showroom, Delhi). For the variant-wise on-road prices, visit us at autoX.

For more on theMahindra Xylo, be sure to tune in to autoX. Also, grab the latest info on the new cars, only at autoX.

The Best Telugu Movies That Stole Our Heart

A Detail for Garden Buildings You Would Go For

Expert traders have better ideas than you